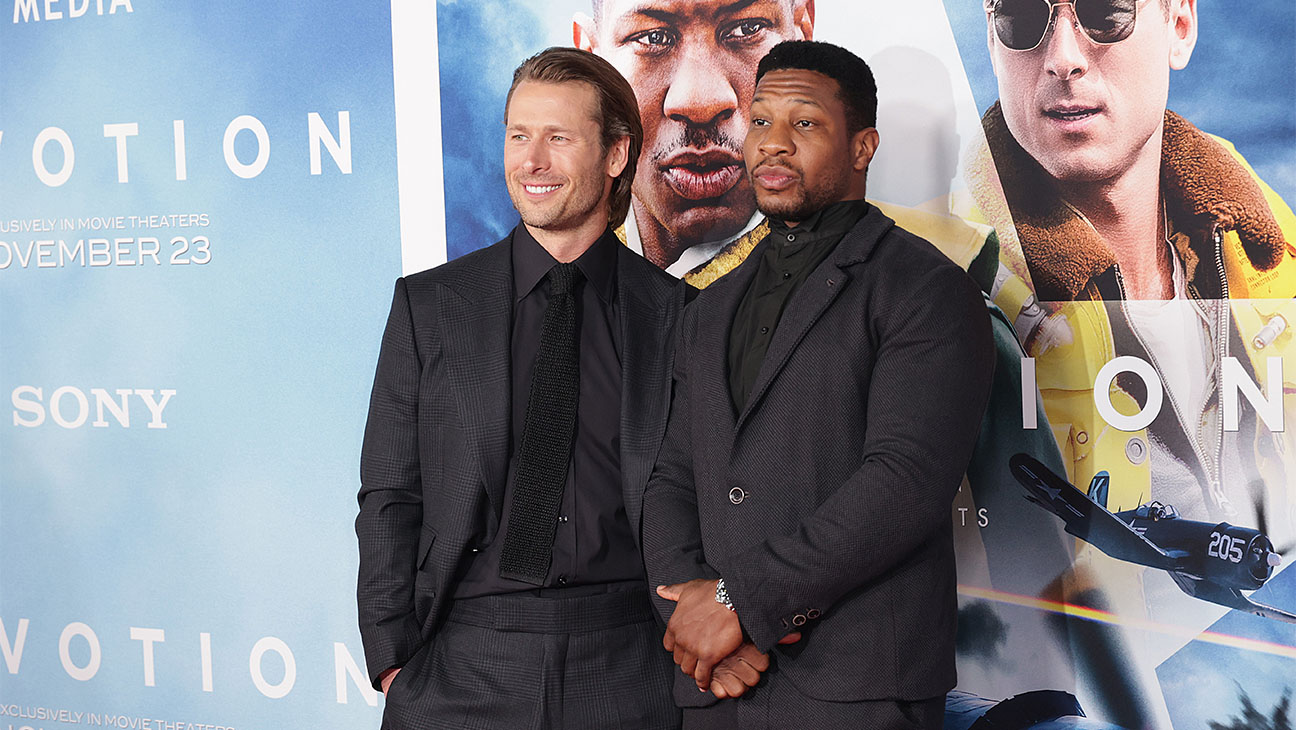 Glen Powell on Getting Tom Cruise’s Blessing to Do Both ‘Devotion’ and ‘Top Gun: Maverick:’ “There’s Room for Two”

“That person had a couple drinks at a Hollywood party and told me they weren’t planning on making this movie,” Powell recalled to The Hollywood Reporter at the film’s premiere on Tuesday. “And I said, ‘Would you mind if I made it?’ And they were like, ‘Yeah, sure.’ So I went to [author Adam Makos], and I said, ‘Hey, if you let me have this, I promise I’ll tell it in the best way possible.’”

“I knew [this story] stood a chance when Glen Powell came to me,” Makos remembered. “I had to Google him because Glen was not the actor he is now. He wasn’t the superstar yet.” Makos said his test for Powell was for the actor to meet Hudner himself, along with the Brown family.

“Next thing you know, Glen and I were sitting at the kitchen table with Tom having waffles,” the author said. “He treated him like a grandfather.”

Coming off of a breakout role in Top Gun: Maverick as bad boy pilot Jake “Hangman” Seresin, Powell is aware of the unlikely coincidence of starring in two naval aviation movies in one year. When the Top Gun opportunity came about, the actor remembered having to make the tough decision of whether or not he could pursue both projects. It was Tom Cruise’s support that helped pave the way for Powell’s role in the Top Gun sequel.

“I said, ‘Hey, Tom, I already have a naval aviation movie that’s really close to my heart,’” Powell recalled. “And Tom said, ‘There’s room for two. You can do Top Gun, you can do Devotion. You don’t have to choose.’ The fact that Tom gave me the liberty to make both, Black Label and Sony gave me the liberty to make both — I feel like these are two movies that could not be more different from each other, but really complement just the love of aviation and the legacy of our men and women in uniform.”

“I was afraid that Top Gun was going to derail this when he was offered that role,” Makos said of his reservations at the time. “I thought, ‘Jeez, he’s gonna go for that. He’s gonna leave us behind.’ Because who wouldn’t want to act alongside Tom Cruise?”

With Cruise’s blessing, the role of Hangman in Top Gun: Maverick was born — a character much different from Hudner — and Powell moved forward with Devotion.

Directed by J.D. Dillard, the film also stars Majors, who portrays Brown in the film. Dillard — whose own father served as a naval flight officer — noted that Majors and Powell’s off-screen bond mirrors their wingmen relationship on screen.

“I am just so grateful to have caught those men when I did,” said Dillard. “They’ve become brothers and friends in this process, but they’re also incredible actors… The two of them just bring such life and nuance and richness to these roles, and now they’re enormous. They were always on that path, but to sort of watch it happen — I’m so excited for them.”

With upcoming roles in Creed III and Ant-Man and the Wasp: Quantumania, Majors took a different approach in his preparation to play Brown. “For me, when you play someone that walked and talked and loved in real life, it’s a matter of inspiration,” Majors said of his process. “You’re not using too much imagination. It’s inspiration — we’re in an acting class now — which has the same amount of energy to it, it just allows you to process it differently. You have to figure out what inspires [Brown] most. It’s clearly flight, but what about flight inspires him? Where do you find that inspiration? When he holds his daughter up, he understands what it is to actually be in the air, so you’re looking for those things. It’s a quieter process because you have to listen to something that’s not present.”

Joe Jonas also makes his big screen debut in the film as real-life naval officer Marty Goode. Jonas — whose grandfather served in the military — prepped for the role by studying photos of Goode and listening to his voice. Once production wrapped, Dillard asked Jonas if he would be up for writing the end-credits song.

“I saw [the film in its early stages] with my buddy Ryan Tedder and there was a grand piano in the screening room, and we just started writing the song,” Jonas remembered of creating the track “Not Alone.” The inspiration was about “being there for somebody, whether you’re there physically or spiritually, whatever it may be, and the importance of that. It took a lot of really digging through the layers, making sure that everything hit the right way that I wanted it to. I’m so proud of how it came together.”

As for his acting career, Jonas said he “would love to do more,” adding “It’s definitely a passion of mine. I’ve got some things brewing. I’ve talked about some projects with Black Label Media, developing some things, so it could be a busy year.”

Glen Powell played ‘Hangman’ in the new Top Gun: Maverick movie and was awarded the Bob Hope Award for Excellence in Entertainment.

“This is by far the coolest moment in my career as far as honors go,” Powell said.

Powell said he spent most of the year on military bases as he trained for his roles in Top Gun and a new movie coming out in November called DEVOTION. He said it was great to see so many Medal of Honor recipients in once place at the Knoxville Convention Center.

“Hard to describe how I can now find myself in a room with what I believe are the best of our country,” Powell said.

In his role in DEVOTION, Powell will play Medal of Honor recipient Tom Hudner. Hudner was a U.S Navy aviator during the Korean War, becoming one of the most celebrated wingmen.

“They do an extraordinary thing and they don’t feel like anyone else would’ve done it differently but I think it’s when incredible people with strong moral fabric and courage rise to the occasion,” Powell said.

Also honored was former South Carolina Gov. Nikki Haley. She was given the Patriot Award, the highest award given by the Medal of Honor Society.

Two others honored Saturday night are Dr. Tim Miller and Courtney Kube. Dr. Miller received the Distinguished Citizen Award and served as a plastic surgeon to help soldiers injured while in the line of duty. He also served in Vietnam from 1965-1966.

Courtney Rube received the Tex McCrary Award for Excellence in Journalism. She is an NBC correspondent covering the Pentagon and Department of Defense.